With their piercing orange eyes, the Chartreux is undeniably unique. They are a sturdy French breed renown for their hunting prowess and dense, water repellent fur.

Despite their larger size, they are extremely supple and agile cats, refined, never coarse or clumsy.

They aren't the most vocal of cats and love nothing more than to sit on your lap and spend time with you.

History of the Chartreux cat

The Chartreux is a French breed and supposedly dates back to the 18th century and perhaps earlier. There are many legends surrounding their exact origin with one being that they were bred by Carthusian monks to keep the monasteries free of mice and rats, although there is no evidence to support this.

However, as is the case with many breeds, it’s not really known how the Chartreux cats came by their name or how or where they were developed. One of the earliest references to a French gray cat dates to 1558, in an epitaph for Belaud, who belonged to poet Joachin de Bellay. Bellay describes Belaud “death to rats,” which is certainly an attribute of the breed, then and now.

French naturalist George-Louis Leclerc, Comte de Buffon, described them as the cat of France and gave them the Latin name Felis catus coeruleus, meaning blue cat. Free-living groups of the cats lived in Paris and other areas of France until the early 1900s.

World War II brought an almost irreversible decimation to the breed. Efforts were made to preserve the breed with breeders gathering as many Chartreux cats and kittens as possible so they could write a breed standard.

It was fortunate that fanciers had begun to breed the Chartreux when they did, because after World War II, none of the free-roaming cats could be found. Chartreux, which are still uncommon, were first imported into the United States in 1970 and were recognized by the Cat Fanciers Association in 1987. Today the cats are recognized by all major American cat associations.

The Chartreux is a sturdy cat with broad shoulders, a deep chest, and medium in length. Their legs are short to medium in length with fine, strong boning and their feet are small and round. The tail is heavy at the base, tapering to an oval tip.  The Chartreux has a dense and solid musculature.

A Chartreux cat or kitten's head is comparatively large compared to their body and is rounded and broad, but not sphere. They have a slightly rounded forehead and their cheeks are full. The jaws are powerful, especially in adult males over two years. Overall, the Chartreux has a sweet, smiling impression.

Their ears are small to medium in size and placed high on their head with erect posture. Their is minimal flare at the base and they have rounded tips. The eyes are rounded, open and alert yet not overpowering. Colour wise, they range from gold to copper with a clear, deep, brilliant orange being preferred. Blue eyes are also seen within the breed.

The Chartreux has a narrow muzzle in relation to their head. Their nose is straight and medium in length and width and their neck is short, strong and heavy-set. 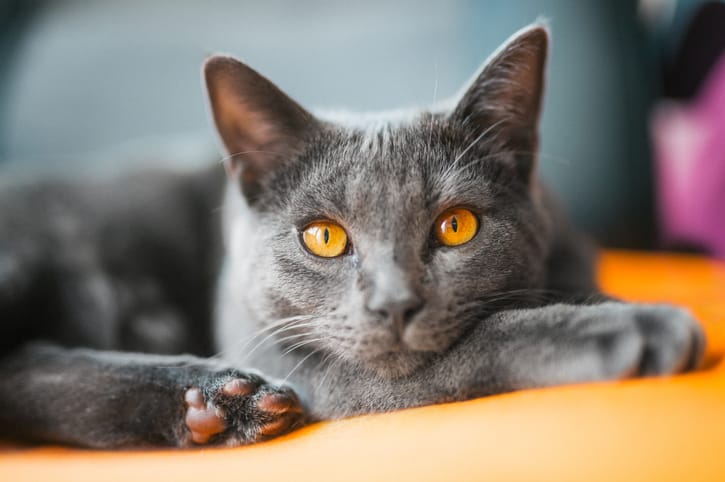 The Chartreux has a medium-short coat with a dense, slightly wooly texture. They have a resilient, all weather coat. Silkier, thinner coats are permitted on females and cats under two years.

As for the colour, a Chartreux's coat can be any shade of blue-gray from ash to slate. The tips of the coat may appear to be lightly brushed with silver. The preferred colour of a Chartreux is a bright, unblemished blue with an overall iridescent sheen.

The Chartreux is renown for being a silent but communicative breed. Their ideal day consists of short playtimes interspersed with naps on your lap and meals. They are an attentive and sensitive companion who likes to stay near their people and observe their doings.

Gentle he may be, the Chartreux is also playful and intelligent. Throw a ball for him to chase, or be amazed by his acrobatics when you dangle a fishing-pole toy for his entertainment. The Chartreux chirps when he wants your attention but is otherwise quiet.

Known for his woolly blue coat, the Chartreux requires combing, not brushing, to keep them looking beautiful, soft and shiny. They shed their undercoat a couple of times a year, and you’ll probably want to comb them daily during that time to keep the flying fur under control.

The rest is basic care. Trim the nails as needed, usually every week or so. Brush the teeth frequently with a vet-approved pet toothpaste for good overall health and fresh breath, and schedule regular veterinary dental cleanings.