The Ceylon cat or the cat of Ceylon, is originally from Sri Lanka.

It's a relatively rare breed, characterised by its very playful temperament.

History of the Ceylon cat

The Ceylon cat originates from Sri Lanka. The name "Ceylon" is the old name for the island situated in the Indian ocean. It was an Italian named Dr Paolo Pellegatta who first discovered them in 1984. He liked the local wild cats so mcuh that be brought several back with him to Italy with the help of the head of the Colombo Zoo.

There, he started a breeding program along with other breeders to identify a new breed, remove unwanted features and set a standard. The Ceylon soon became a huge success with the Italians.

However, a second hypothesis based on more in depth research led them to believe that the Ceylon cat in fact originated from ancient Egypt. The Ceylon today is therefore a cross between cats from Sri Lanka and cat from Egypt, called Chaus.

In 1988, the Ceylon club was created, and the same year, Dr Pellegatta brought six generations of the breed to an International Feline Federation exhbition, with documents showing it in its natural habit, in the hope that the breed would be recognised. But he had to wait until 1993 before this finally happened.

Today, the Ceylon cat is still considered as a very rare breed and it isn't recognised outside of Europe, although it is very widespread in Sri Lanka.

The Ceylon has a semi-cobby body type and is of average size with a relatively compact body. It has a fairly normal shape with a slender but powerful figure.

Their legs are also of average size and are slender yet powerful, finishing with rounded paws. Their hind legs are higher than their front legs.

Well proportioned with the rest of its body, the head is of average size and triangular. They have well-defined cheek bones and a slightly rounded skull.

Its nose is rather short but nevertheless in harmony with the rest of the face. It has large eyes which must either be yellow or green.

Their ears are on the larger size and placed quite close together on the top of the head, with a rounded tip.

The tail is quite short, larger at the base and thinning out towards the tip.

The Ceylon's coat is known for being soft and silky. The hair is fine and there is no undercoat. 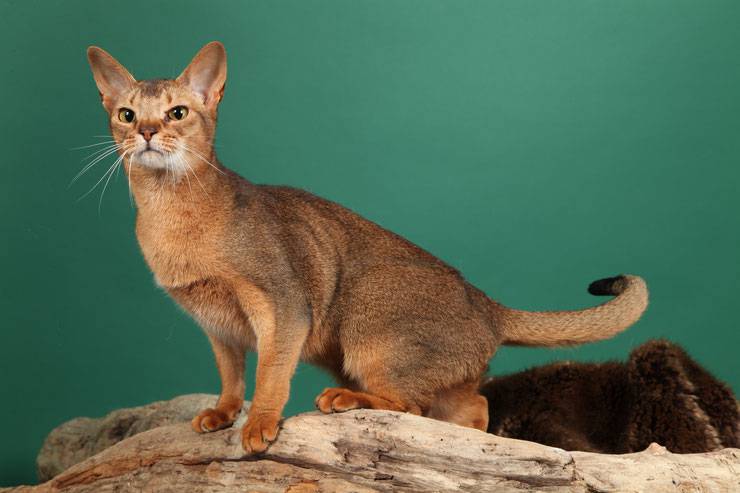 The only colours accepted for a Ceylon are black, blue, ginger, cream and tortoise shell. No crossing is allowed with other breeds.

Its coat can be stripy, but must be the same colour as the hair.

The Ceylon cat is known for being timid, but this doesn't stop it from being lively. Very discreet, they miaow very little and can not be heard when they're walking around the house.

They are very sociable and adapt well to other cats and dogs being in the house. They are also very trustful of their masters. The Ceylon likes to be at the heart of the family and it's not in their nature to venture far from their home.

Having said this, the Ceylon cat enjoys hunting, so it's important that they have games or a cat tree to allow them to blow off steam.

The Ceylon is not susceptible to any particular illnesses. However, it is important to feed it a healthy and balanced diet. Fun fact, in its natural habitat in Sri Lanka, it is known for having a particular taste for coconut pulp.

The Ceylon cat has an average lifespan of 15 years.

Due to its short hair, the Ceylon cat doesn't require any particular treatment with a weekly brush sufficing.