The Birman, also called The Sacred Cat Of Burma, is an elegant cat with long hair and deep blue eyes. Known for its sweet personality, it is also playful and affectionate. They make ideal family cats.

History of The Sacred Cat of Burma or Birman cat

There are several legends surrounding the exact origin of the Birman cat.

The first came from the pen of novelist Marcelle Adam. A very long time ago, in Burma, Mu Ha, an old monk who lived in a temple devoted to the sapphire eyed goddess, Tsun Kyan Tsé watched over no less than 100 cats, all of whom were immaculately white. Alas, the temple was once assaulted by armed bandits who killed Mu Ha.

Sinh, the man's favourite cat, leapt on the monk and faced the statue of the goddess. As a reward for the cat's love and devotion to his priest, she turned his white coat golden and changed his yellow eyes to blue. A little while later, Sinh died, and all the other cats in the temple transformed, developing the same characteristics as Sinh.

Another, perhaps more realistic version, places the Birman's origins in France. But again, the reality remains blurry. Some attribute the Birman's arrival to France to american millionaire family, the Vanderbilt's, who reported brought two Birman's over from Burma; a male and a female. The female, named Sita eventually gave birth to a litter of kittens. Between them was Poupée de Maldapour, from which all Birman's today supposedly descend from.

Other accounts credit August Pavie, a French explorer and diplomat, as well as Sir Russel Gordon, with the importation of the Sacred Cat of Birma. Khmer priests supposedly offered both the men two cats as thanks for protecting them during a religious revolt. This revolt did in fact take place, but well before the arrival of the Birman to Europe.

The male died upon his return to France but not before impregnating the female who later gave birth to a litter of kittens. A slightly less fantastical version, but arguably more plausible is that the Birman cat is the result of an accidental crossing between a Siamese and a Persian.

The fact remains that the breed was first recognised in France in 1925. The Birman cat disappeared after the second world war. Only a couple remained, Orloff and Xenia, from Kaaba, from which Birman's today descend from. The Sacred Birman, so named to avoid confusion with the Burmese, was officially recognised in 1950 and was bred all around the world where it was met with great success.

Between myth and reality, the Birman's origins are as fascinating as they are unclear. A beautiful legend for a beautiful cat.

The Birman cat is an elegant breed, of average size but with an elongated body and a heavy build. They are well-muscled but nevertheless well proportioned. Its back is straight and the legs are of average length. The paw is round with a pink pad.

The head is large and round, although longer than wide from side on. The muzzle is also large, with a short and straight nose. The cheeks are full and the chest rounded. A Birman cat or kitten has big, round eyes that are well spaced, and always blue. The ears and high and large, with large tufts of hair surrounding them. The tail must be averagely sized and in proportion to the rest of the body. 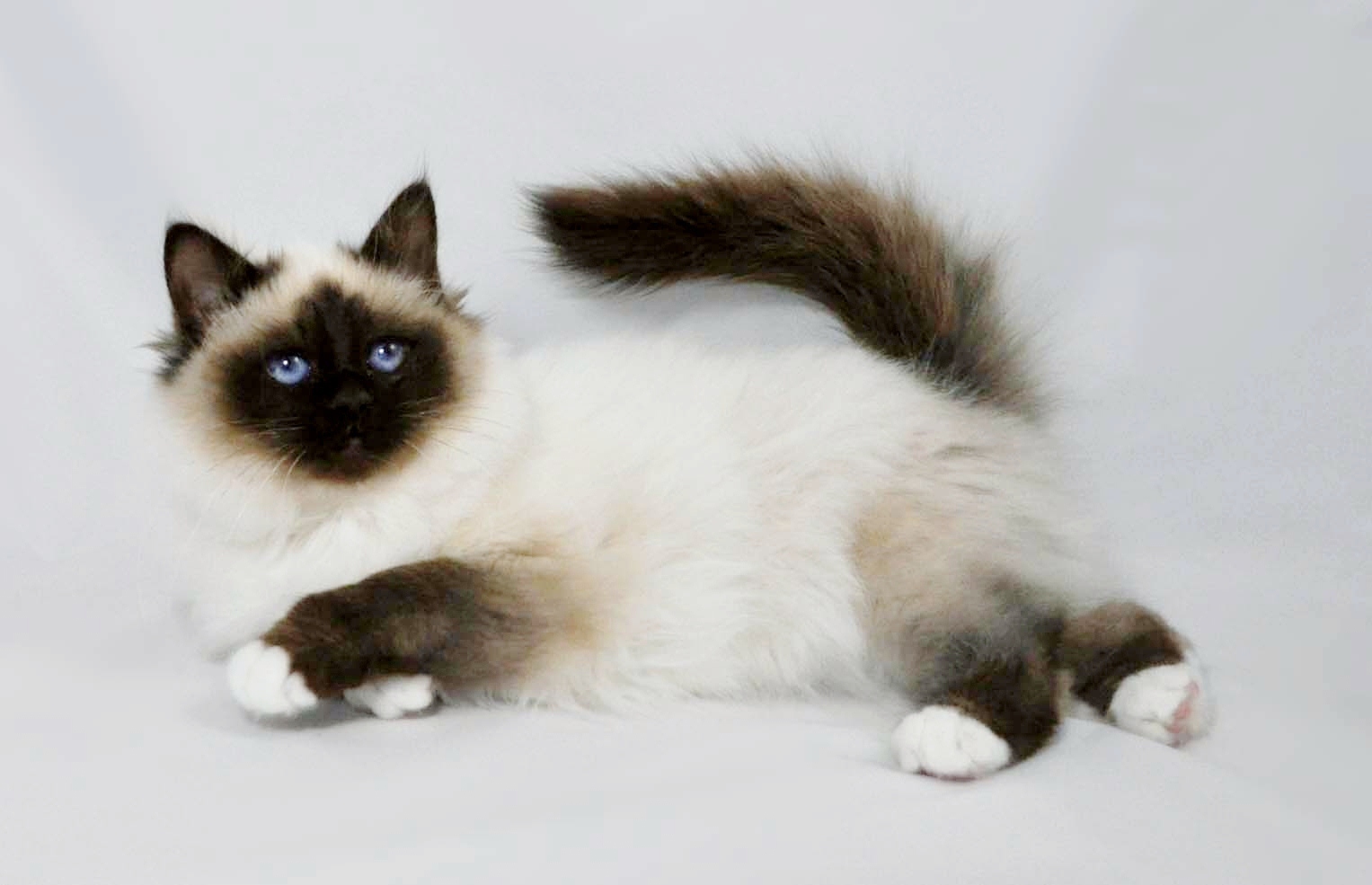 A Birman cat or kitten's hair is mid-length and silky, always a golden beige. Short around the face, the fur thickens out around the neck, forming an impressive collar, particularly in males. The hair continues to lengthen along their back, and can sometimes be frizzy around the belly.

The bottom of the legs, called the 'glove', and the stomach are always white – this is one of the breed standards -, and the only coat accepted is colorpoint: the face, legs, and the tail are the only places allowed to be a different color to the rest of the fur.

The Birman cat or kitten has a quiet, inquisitive and sensitive nature, which can cause them to become fearful in a less than suitable environment. They are also playful cats, who love spending time with their family.

The Birman also loves to explore their surroundings. Be careful though as they are docile cats with a tendency to get lost so make sure you keep tabs on them.

They are sometimes referred to as the "cat-dog", for their pleasant and affectionate personality. They love being held and cuddled. Hating being alone, they get on well with other cats and animals.

Although the Birman is a solidly built breed, it is not without its health issues. From the age of seven onwards, it is highly recommended to change its diet switching to cat food specifically for older cats, in order to reduce the risk of obesity and digestion troubles.

The Birman can also suffer from a illness known as polycystic kidney disease, which is hereditary. The kidneys are not able to function properly due to the presence of cysts. In the most advanced stages, the cat loses weight, becomes lethargic and loses its appetite. Alas, this disease is incurable, but early detection and treatment will help prolong their life. DNA tests carried out by breeders allow carriers of the disease to be identified and thus excluded from the breeding process.

The Birman cat or kitten needs regularly brushing, especially during molting season. However, its fur is generally not susceptible to knotting. A warm bath every now and then is also recommended.

Brush the teeth to prevent gum disease. Daily dental hygiene is best, but weekly brushing is better than nothing.

The Birman cat does not need lots of upkeep, making it an ideal cat for busy owners.