The Bengal is a domestic cat breed developed to look like exotic jungle cats as such as leopards, ocelots and clouded leopards.

Bengal cats were developed by selective breeding from hybrids of the Asian leopard cat with domestic cat, with the goal of creating a confident, healthy, and friendly cat with a highly contrasted and vividly marked coat.

They are highly intelligent and active cats that can at times be challenging but nevertheless lots of fun and highly affectionate!

History of the Bengal cat

American breeder, Jean Mill, was the first person to make such a cross. She had acquired a leopard cat and allowed her to keep company with a black tom cat so she wouldn’t be lonely. To her surprise, since she hadn’t thought the two species would mate, kittens resulted, and Mill kept a spotted female.

It was through this kitten that Mill was able to produce a litter of spotted and solid kittens. At the same time, Dr. Willard Centerwall at the Loyola University began crossing the same two cats. Mill aquired some of Centerwall's hybrids and sought out suitable males to breed to them.

One was an orange domestic shorthair that she found in India, and the other was a brown spotted tabby acquired from a shelter. Bengals today are considered to be one and the same with domestic cats, and any Bengal purchased should be at least four generations removed from any ancestors with wild bloodlines.
The International Cat Association (TICA) was the first association to recognize the Bengal as a breed in its own right, in 1991. The Bengal is also recognized by the American Cat Fanciers Association, the Canadian Cat Association and the United Feline Organization.

The Bengal cat is a medium to large sized cat with their musculature being one of the most distinguishing features. The legs are medium in length, slightly longer in the back than the front. Their feet are large, round, with prominent knuckles.

A Bengal's tail is medium length, thick and tapered at the end with a rounded tip. Their head is longer than it is wide, but still quite small and in proportion to the rest of the body. The Bengal's ears are medium to small and relatively short with a wide base and rounded tops, being set as much on side as top of head.

A Bengal cat's eyes large, oval and almost round. They are set wide apart and on slight bias towards the base of the ear. The eye color is independent of coat color.

The muzzle is full and broad, with large prominent whisker pads and high, pronounced cheekbones. A Bengal cat or kitten's nose is large and wide and their neck is long, muscular and in proportion to the rest of the body.

Being a relatively large cat, Bengals weigh between 8-15 pounds or more. 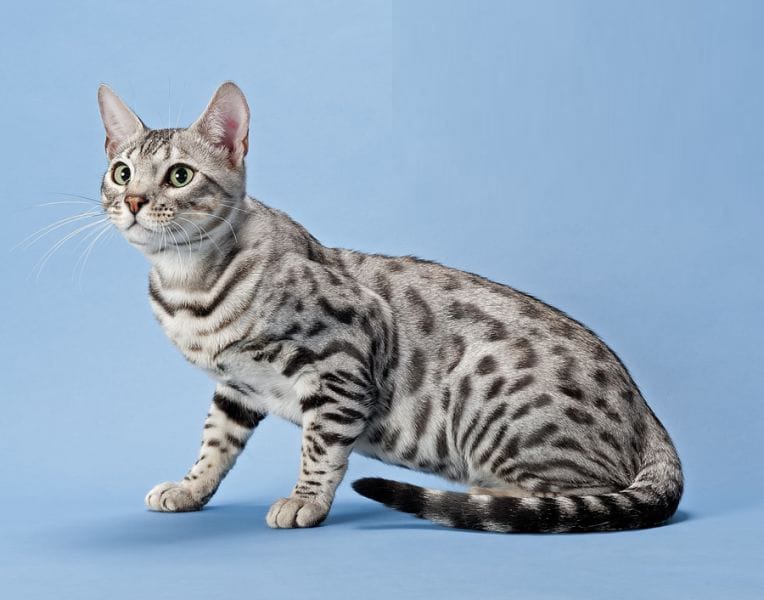 A Bengal's coat is one of its most distinguishing features. It comes in several colors and patterns, including seal mink tabby, brown tabby, black silver tabby, and seal silver lynx point.

The coat can either be spotted randomly or in horizontal patterns. It can also be marbled, with horizontal stripes arranged randomly on a lighter background.

Some Bengals have a coat that is described as “glittered.” The fur shimmers in the light, as if it were tipped with gold dust.

When a Bengal roles over, you can see that they have a spotted belly which enhances their wild appearance. They also have a short, thick pelt that feels luxuriously silky and soft.

Like most cats, the Bengal is a highly intelligent and active breed. Althought this makes them very fun companions, it also makes them quite challenging at times, so they're probably not suitable for a first time cat or pet owner. They are generally a confident, friendly cat who is always alert.

When a Bengal cat becomes bored, they can adopt some rather unconventional habits including turning light switches on and off for example. They love to climb so it's not unusual for you to find them perching at the highest point they can reach in the home.

To challenge their intelligence and stop them from becoming bored, a cat tree or even two is a must. Despite their playful temperament, Bengals are very affectionate and love to sit on your lap. They have also been know to share your bed.

They get along well with other pets, including dogs and love playing with children towards whom they are very gentle. They also love water so don't be surprised if they join you mid-shower or bath!

Bengals on the whole are healthy but the following illnesses have been seen within the breed:

Brushing a Bengal's short, luxurious coat once a week is enough to keep it looking soft and silky. As with most cats, it is recommended that you brush their teeth and clean their ears weekly as well.