The Balinese is quite simply the long-haired cousin of the Siamese cat. Both cats share the same history and physical traits, namely a slender body and a triangular head.

The Balinese cat is calmer than the Siamese but still has a sociable, extroverted personality.

History of the Balinese cat

The Balinese cat and the Siamese cat share the same history. The only difference between them is the length of their hair, this being due to a spontaneous genetic mutation among Balinese kittens.

According to legend, these cats originate from Thailand, where they were raised by the King of Siam to look after the sacred temples. Rumour also has it that the real sacred cats were the Khao Manee and the Balinese were given to the English to stop them from stealing them.

Whatever the case, the Balinese cat arrived in Europe thanks to the english at the end of the 19th century. The first semi-long-haired Siamese found in Europe was born in the late 1920's. It isn't the result of any cross-breeding, which suggests that this characteristic is the result of a genetic mutation.

After the second world war, the first Siamese arrived in America where it was immediately a winner. It was within this time that Balinese breeding was started by two american breeders.

They chose to name the breed themselves, coming up with the name "Balinese" as their appearance reminded them of balinese dancers.

Between 1970 and 1983, the main breeding associations recognized it as an official breed. From that moment on, the figure of the Balinese has been refined thanks to cross-breeding with the Siamese cat.

A Balinese's body is of average size and particularly slender. Their muscles are firm and supple along with their bone structure, which gives them the appearance of being graceful and elegant.

Their legs and neck are long and thing with a strong musculature too. The Balinese's feet are small and oval shaped.

Its long tail is slender and in perfect harmony with its figure. Their tail is often compared to an ostrich feather as its hairs are thin and light.

The Balinese's head is one of its most distinctive features, being triangular and of average size. Their skull and forehead are either flat or lightly rounded. A Balinese's muzzle flows on from its head, having a long and straight appearance when looked at side-onwards.

The eyes of a Balinese cat are of average size and almond, an "oriental" shape. They are tilted towards the nose and are in harmony with the shape of their skull. Generally, their eyes are blue and often quite intense. 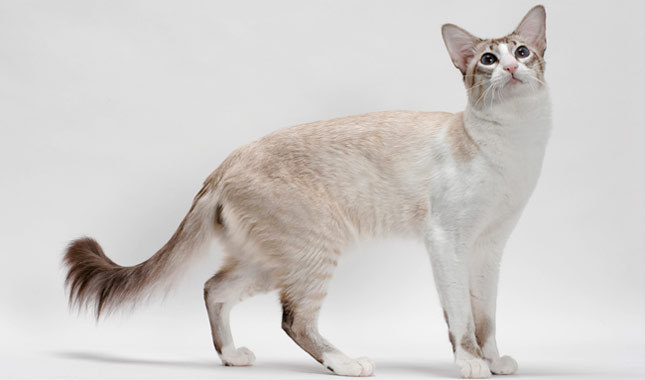 It's thanks to their coat that we are able to distinguish the Balinese from the Siamese. Their fur is semi-long, without an undercoat, whereas the Siamese's is short.

Their hair is well spread out over their body and very silky. The fur is shorter towards the shoulders and lengthens as it reaches the flanks, rump and tail.

The Balinese cat always has a colourpoint coat, that is to say colored at the level of the tail, feet and head. The contrast between its extremities and the rest of its body should be very obvious.

It should also be noted that colourpoint cats only come into their own after a certain age. It is therefore very normal that Balinese kittens are entirely black during the first couple of months of their life.

Just like Siamese cats, Balinese cats are very playful and extraverted. They love to get to know people and other animals, playing with them and cuddling them.

They are often called "chatty", meowing when they want attention.

They are very affectionate and generally calmer than the Siamese, for unknown reasons.

The majority of oriental cats, like the Balinese, are often more prone to a disease known as amyloidosis. The illness was only discovered recently meaning its causes and the way in which its transmitted are not yet known. However, it is known that it can be hereditary.

The main symptoms of amyloidosis are diarrhoea, a generally depressive state and a refusal to eat. It causes chronic renal failure for which there exists no treatment. Most cats affected die before the age of five.

Balinese are also more susceptible to being cross-eyed. This affects nearly all colorpoint cats. It affects their 3D vision and can reduce the sharpness of their vision as well.

Despite having semi-long hair, Balinese cats are surprisingly easy to maintain. Thanks to the absence of an undercoat, their fur is less likely to get tangled than other cats with the same length hair.