The American Wirehair is a breed originally from America. They are the result of cross breeding and are characterised by their curly and thick hair, as the term "Wirehair" which means hard-coat suggests.

The History of the American Wirehair

This breed of cat comes from the American Shorthair, a "rustic" breed which descends directly from the domestic short-haired cat. They were born in New York, America, in 1966.

American Wirehair cats have a round head and are of average size. Descendants of farm cats, they are both balanced and robust.

They are solidly built, which gives them a certain presence. Their paws are also of average size.

Their tail, averagely sized, thins out towards the tip.

The head, again of average size, compromises of full cheeks which gives them a very soft expression. Their cheekbones are quite prominent.

Always well balanced, the nose of an American Wirehard is neither too long or too short. Just like the American Shorthair, their muzzle is short and quite flat.

Their ears are averagely sized, perfectly spaced apart, with an open base. Rounded and sloping, their eyes are medium to large in size. As for the colour of their eyes, the physical criteria for this race states that they must be the same color as their coat.

Another characteristical feature of American Wirehair cats is their hair. These cats have a mix of curly, frizzy hair which forms a hook at the end. Slightly rough to the touch, their fur is not the nicest to stroke. Fun fact, their whiskers are also curly.

The American Wirehair reaches on average a height of 30-35m with females weighing 3-5 kilos and males, 5-8 kilos. 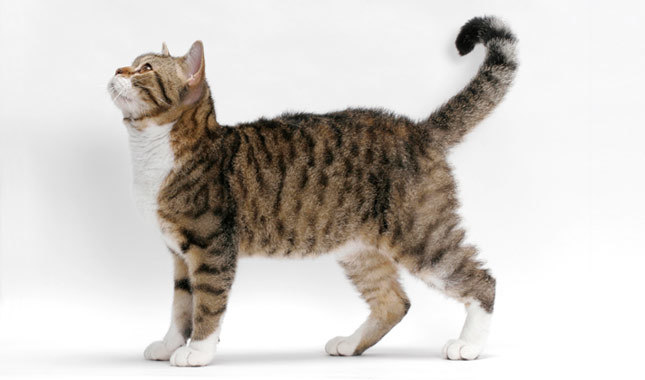 Although the first American Wirehairs had a white coat, all colours are accepted today for the breed with the exception of lilac, cinnamon and chocolate brown.

American Wirehairs make very good pets. They have several qualities, the first being that they are unequivocally athletic.

Because of their morphology, they are very robust cats who aren't scared of dirtying their paws. They are independent but also enjoy playing with children and other dogs and cats who'll give them the time.

However, you must not forget that American Wirehairs descend from farm cats and therefore have the temperament of a natural hunter. You are therefore advised against living with mice, rabbits and other rodents.

American Wirehair cats are also very cuddly and know how to balance their liveliness with their affection. They also have a strong tendency to purr.

Very lively and curious, their personality is often linked to that of a dog. They adore playing hide and seek around the house and in the garden and are very sociable with other cats as well as children and adults. This trait comes from the American Shorthairs from which they descend.

The American Wirehair loves to adventure out in nature and its not rare for them to explore their environment. This means they need to have an eye kept on their health to avoid infection from potential injuries.

The American Wirehair is a very intelligent and curious cat which is why it's necessary to provide them with an environment which will cater for this so they can fully come into their own. Access to a garden will allow them to develop their inherent qualities.

The American Wirehair is not prone to any particular illness or disease.

As for their fur, a soft brushing once a week is enough for their upkeep.