The Abyssinian Cat, also called the "Bunny Cat" or "Aby" is a cat well known for its slender looks and its particularly large and expressive eyes.

Active and playful, they are also very affectionate and easy to train. They make ideal pets as long as you have a garden and enough time to love and care for them.

History of the Abyssinian Cat or "Bunny cat"

The Abyssinian's are an ancient breed and their origins are surrounded with uncertainty and speculation.

Their name could suggest that they're originally from Abyssinia (now Ethopia), in Africa. But this breed of cat could also have been named after an english diplomat who brought them over from Europe for the first time in 1868. The first Abyssinian cat was named "Zula" and was found in Abyssinia.

However, this breed is also credited with two other origins. Firstly Ancient Egypt. The Abyssinian could in fact be a descendent of the cats worshipped in Egypt, revered for their hunting talents and elegance. The Egyptian goddess Bastet is portrayed with the bodily traits and characteristics of a cat, notably the Abyssinian. The legend states that the Pharaoh, Ramesses II was the first to introduce the breed to Egypt.

But the true origin of this breed is South-East Asian or more precisely Indian where the cats have the same physical and behavioural characteristics as Abyssinians such as their speckled coat.

The breed we know today descends from Zula, the cat imported from Africa to Europe. After arriving in the continent, breeders started to cross-breed in order to meet certain criteria.

The Abyssinian was cross-bred with the British Shorthair cat which gave it a finer figure while also preserving its speckled coat. Its the similarity of its coat with a hare that earned it the name "Bunny cat".

Abyssinian cats are of average size with a slender and supple body. They are very active with good musculature and an elegant gait. They are lightly arched and their long tails are well proportioned and contribute harmoniously to their figure.

Their head and ears form a very prominent part of their appearance and largely ressemble the cats worshipped in ancient Egypt. Shaped like a triangle, the head of the Abyssinian is composed of soft curves and their muzzle is never pointed.

Just like their ears, the eyes of an Abyssinian cat or kitten are big and expressive. They are almond shaped and can be yellow, hazel or green. Their expression is always sombre, reminiscent of the make-up the Egyptians were renown for. 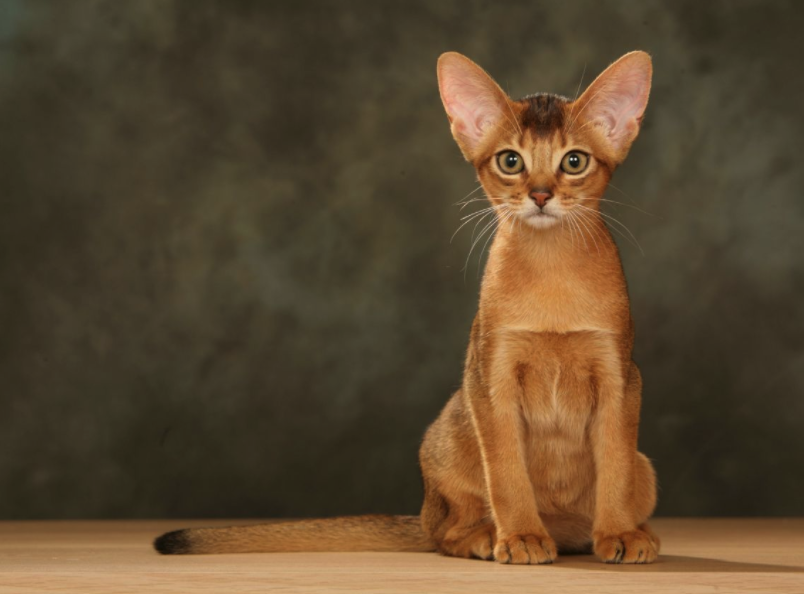 The coat of an Abyssinian cat or kitten is short, shiny and fine. It's longer on their back and shortens as it reaches the head, legs and sides. The colour of this breed's coat is one of their main characteristics.

An Abyssinian's fur must alternate between light and dark colours. This is called ticking and further emphasises their similarities with the hare. The "Bunny Cat" must not have any stripes, except on the head.

There are 28 possible possible coat colours for Abyssinian cats. Among the most common are the aforementioned hare colours or a mix of reddish, orange and brown. Chestnut and cinnamon coloured Abyssinians have an intense brown/red coat which resembles that of a cougar. Blue coloured cats are a mix of beige and grey while those with a fawn coat are completely beige.

An Abyssinian cat or kitten is a very active and playful pet, always alert. They love to run, jump and take great interest in their surroundings. Because of this, it is advised that they have a large amount of space at their disposition so they can explore and exert themselves.

Despite their hyperactive temperament, they remain very affectionate cats. They love to be stroked and taken into your arms for long cuddles. The Abyssinian can be a bit mistrustful of people they don't know but will be very loving with the humans they like.

If you want your Abyssinian to feel confident around you and open up to you, it's important to take the time to play with him. This allows him to let off steam while strengthening his bond with you.

An Abyssinian cat can be prone to several genetic illnesses. Among these is amyloidosis which is the most serious.

It causes a substance to build up in their body which eventually leads to kidney failure that can sadly not be treated. The disease can be triggered by an infection, autoimmune disease or a tumour.

There is no way to detect or prevent amyloidosis in a cat. This disease usually occurs in cats aged five and over.

The Abyssinian cat needs a decent amount of space and if possible, access to the outside to keep them happy. Due to their active temperaments, they also need more food than most cats.

Their coat doesn't require much upkeep. It's enough to regularly brush it to maintain its shine.