Many people worry that their cat spends too much time sleeping. But did you know that cats sleep an average of 16 hours a day?

The truth is, cats sleep twice as much as we do, so it just seems like they sleep all the time. So sleeping for a long time is a normal part of your cat’s daily routine. However, there is still such a thing as over-sleeping which can hint to potentially serious health issues.

Why is my cat always sleeping?

It is not uncommon to associate cats with being highly energetic, playful creatures. However, cats in fact nap constantly and are exceptionally good at it.

Their wild counterparts, whether they be a Bengal tiger or a feral kitty, must hunt for their food. This takes a lot of time and energy. By sleeping as often as they do, cats are able to conserve their energy so they're in prime condition to hunt.

Granted, a domestic cat doesn't have to hunt down their food but the same principle stands. By sleeping for as often as they do, they are compensating for the extreme energy expenditure that occurs while they're on the go.

16 hours seems to be the average amount of sleeping time but it is not uncommon for older cats and kittens to snooze for up to 18 hours a day.

Contrary to what many may believe, cat's aren't nocturnal creatures. They are in fact what is known as crepuscular animals meaning they are most active at sunrise and sundown — the easiest times for cats to find and catch their meals.

This dominates the sleep patterns of all cats, feral and domesticated alike. Genetic behaviour doesn’t change. 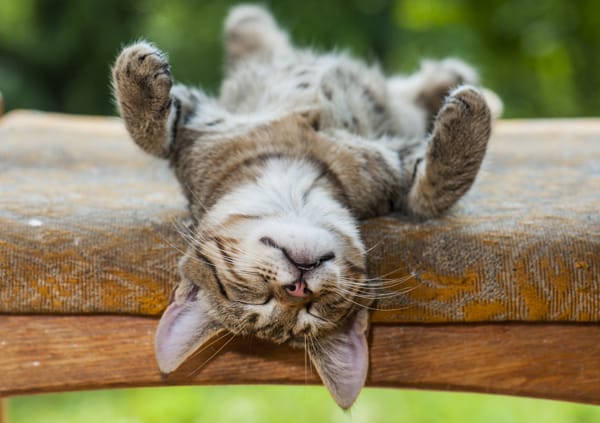 Is my cat sleeping too much?

If  they are sleeping more than 16 hours and aren't a senior cat or kitten, then this might be a sign of illness and it is advisable to take them to the vet just to be sure.

The following illnesses could be behind why your cat is over-sleeping.

You’ve heard the expression “Let sleeping dogs lie.” It is equally important to “Let sleeping cats lie.” They love to nap, and it’s perfectly natural. So, if there are no signs of illness, distress or extreme disinterest in play, you shouldn't spend too much time worrying about your cat's sleeping habits.