A Bulldog and a goose…it's a slightly more unusual pairing but nevertheless one which has captured the heart's of internet users everywhere. It all started a year ago when a wild, bad-tempered goose appeared in the pond behind Harry Huff's cabin. It was love at first sight for Huff's bulldog, Sadie and this feathered intruder with the pair soon becoming inseparable.

Huff named the goose Sal, who immediately took it upon herself to become neighborhood protector, keeping a very close eye on her canine friend.

Wanda Holder, a neighbor, said to The News & Observer:

That goose takes her long, long neck and rubs [it] on that dog.

But the best friends have sadly been parted, and tributes to their inter-species bond continue to pour out on social media while people everywhere try to reunite them.

Just last week, Sadie and Sal wandered out onto N.C. 27, a busy highway outside Lillington, which was farther than they had ever wandered before. The sight caused enough fuss that cars pulled over, and witnesses tried to catch the duo.

One of them even snapped a picture of the pair, causing a mini internet sensation, getting almost 300 shares on Facebook, as well as long strings of comments and a post on Craigslist.

We stopped to help the Canadian goose keep the bulldog out of the road … and the goose got (angry). Started chasing everyone around and trying to bite anybody that got near the dog. You can't make this (stuff) up.

According to witness accounts, an unknown woman looped a leash around Sadie over Sal's honking protests. Sal then "chased the car with the dog in it for a little while, then gave up", the Sanford man wrote. 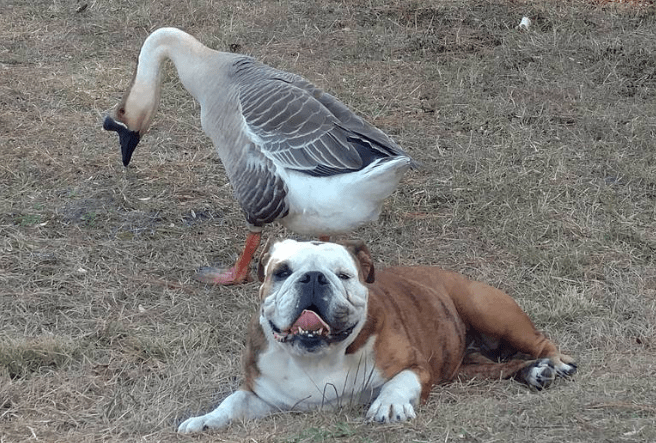 And now, Sal — who also goes by Gary — wanders her street honking in what sounds like a forlorn tone, and it wasn't long before news of her lost friend spread onto social media and Facebook's lost dog sites.

It sorta broke my heart to see the two separated, it really did. You could tell they were pals.

All sorts of theories are bubbling in the neighborhood. Did the mysterious woman take the bulldog because she thought it was being mistreated, because it was in danger or simply because she wanted it?

Let's hope that with the power of social media that the dynamic duo will once again find each other. Until then, honks of sorrow haunt Harnett County.