A family in Alberta, Canada, was in grave danger when their house caught alight in the beginning of February, but they were rescued by their brave and loyal cat. 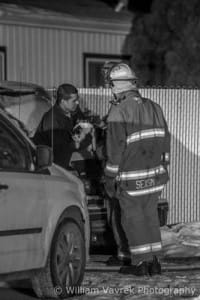 At around 3:30am, the parents and two children were asleep when the cat went into the main bedroom and bit the mother on her arm, waking her up to alert her to the house fire. The family managed to escape and call the fire department. County of Grande Prairie Fire Chief Trevor Grant said in a news statement:

A cat is being credited with alerting a family to a fire in their home early this morning. The family escaped the home without any injuries.

The firefighters manages to rescue a second cat from the blazing house. Freelance photographer William Vavrek appeared on the scene after spotting the smoke and captured pictures of the firefighters extinguishing the flames, as well as a photo of one volunteer, Sheryl Braim, carrying one of the family's cats to safety. 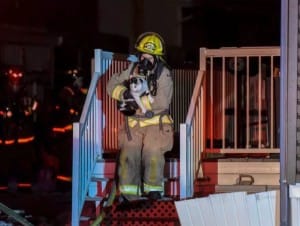 The family has connected with Red Cross Canada and will be staying elsewhere while an investigation to determine the cause is underway.

The family is very grateful to their smart kitty for alerting them to the danger and the reason they are safe today is because of their pet's initiative.