Jokia and Mae Perm have been best friends for 17 years. The two elephants were forced to work as slaves in a labour camp for years before being rescued by Thailand's Elephant Nature Park.

Ever since their rescue, the pair of elephants have been utterly inseparable. Jokia relied heavily on her friend to guide her around as she cannot see. But very sadly, Mae Perm passed away of old age last week.

Mae Perm, the most loving and sweetest elephant at Save Elephant Foundation passed away this morning. This grand lady…

The blind elephant is totally heartbroken by her best friend's passing, and spent a long time standing over Mae Perm's lifeless body, refusing to accept her death.

She stood over her for almost six hours, touching and nudging and leaning against the lifeless body of Mae Perm.

A video here shows Jokia mourning the great loss of her best friend:

Elephant CryWe gave to Jokia a long time to be with her great love. She stood over her for almost 6 hours, touching and nudging and leaning against the lifeless body of Mae Perm. Even then we found it difficult to separate the 2 of them, but we had to manage about the body before too long ( temperatures have been hitting 100 d. mid afternoon lately). Jokia did not eat much during the whole morning, and when she went to get some melons at the other end of her shelter, we took advantage of the moment to pull Mae Perm's body out of the room and gently down into her final resting place. Jokia did come right over as we moved the body, and she touched Mae Perm, moaning painfully as her friend slipped away from her forever. We feel her pain. From today we will do every thing we can to help her though this most difficult time, and into the days of healing and new friendships, Mae Perm never forgotten.

Eventually, the humans at the sanctuary knew it was time to bury the elephant's body. Chailert added:

Jokia did come right over as we moved the body, and she touched Mae Perm, moaning painfully as her friend slipped away from her forever. We feel her pain. 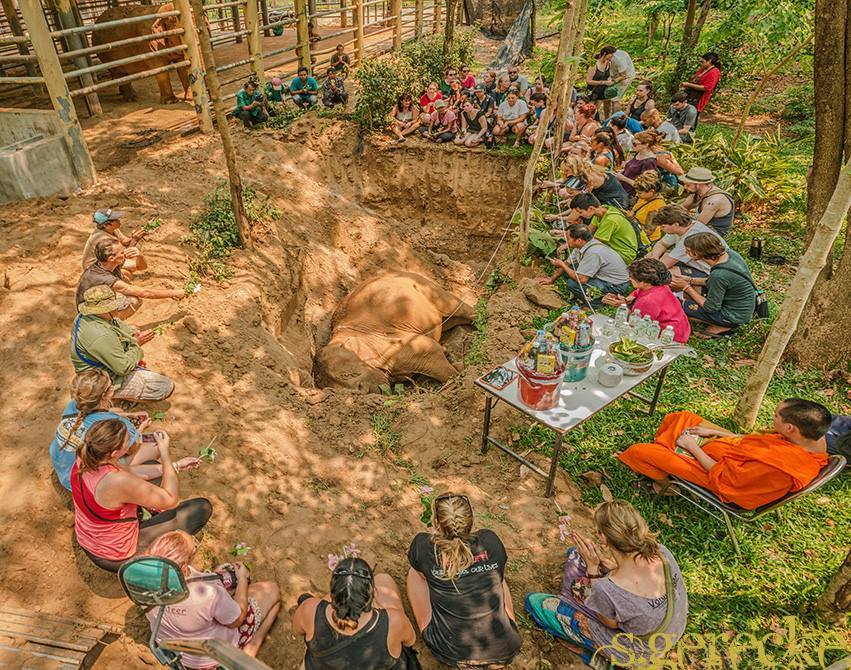 Indeed, Lek Chailert really does feel the grieving elephant's pain. Mae Perm was the first elephant he ever rescued. He remembers:

When I found her [in 1992] she was so sick and skinny from the hard work; at that time it seemed that she was not going to live long because she was so weak.

We're happy that Mae Perm ended up living for another 20 years, in utter freedom with her best friend Jokia. We hope Jokia finds another companion one day.

"You mean so much to me and you will be always in my heart. I love you," the founder finished.