Last November, in south-east Vietnam, a black bear with two amputated paws was rescued from a terrible situation by charity Four Paws.  The charity is trying to put a stop to the use of bear bile in Chinese traditional medicine. 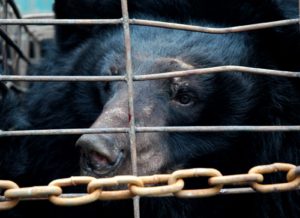 Hai Chan, a Tibetan bear, had been held captive for 10 years before being rescued. The organization is aiming to end this cruel practice by making farmers sign a contract to never extract bile again whilst also ensuring no new bears are brought to their farms. An International Campaign has been launched by the charity with the aim to end bile farms once and for all.

Despite bile extraction being illegal in Vietnam, there are still many bears being tortured with over 1,200 farms still remaining. Michèle Jung, head of Animals Asia, said:

Today, more than 10,000 bears are held in captivity in deplorable conditions. They are very damaged beasts.

The methods used to extract the bile are considered barbaric. Incisions are made into the gall bladder, with a catheter then inserted permanently to make it easier to extract. The bile is then sold for up to $400 per 100 ml. The market for bile is worth more than $2 million each year in Asia. 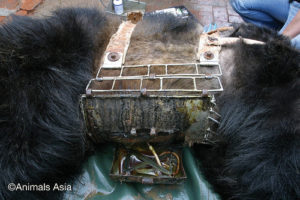 Hai Chan, along with two other bears, has now been moved to a sanctuary in northeast Vietnam where she is being well looked after.

At the time of her rescue, the bear was in an awful state, suffering both physically and mentally. The bile extraction process and the malnutrition had clearly taken a toll on her health. Her paws had already been amputated, likely to produce bear paw wine which is considered a luxurious gift in China. 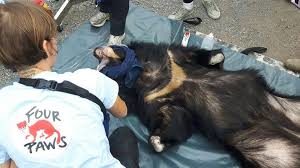 Hai Chan can now walk thanks to Four Paws and the hard work of vet Szilvia Kalogeropoulu. She told National Geographic:

The moment the doors to the enclosure opened and Hai Chan stuck her nose out of the bear house, our entire team was overcome with emotion. This was the first time Hai Chan ever walked on grass. Despite missing her front two paws, she is able to walk on the flats of her front legs and on her stumps…It’s a miracle she built up the strength to do that so fast. 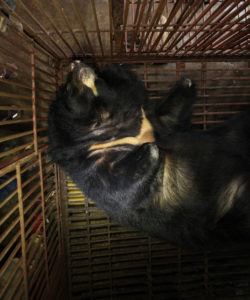 If you want to put an end to this awful practice and help bears like Hai Chan escape a life of torture, you can sign a petition started by French charity 30 Million D'Amis (30 Million Friends), here.