On April 16 2018, a third-tier football match in Russia caused outrage among animal activists after a bear was used to launch the first ball of the game.

Named Tim, the grizzly bear was trained to give the ball to the referee before clapping to the audience.

In a video, you can see the animal being forced to stand up all while being supervised by a tamer.

The club who organised the match has since declared that the bear was present during the match as it was going to be used during the opening ceremony of the 2018 World Cup to be held in Russia in June.

FIFA has denied this, but this isn't the first time that events linked to the World Cup have animal rights charities concerned. A few months earlier, thousands of dogs were slaughtered in the run up to the competition. 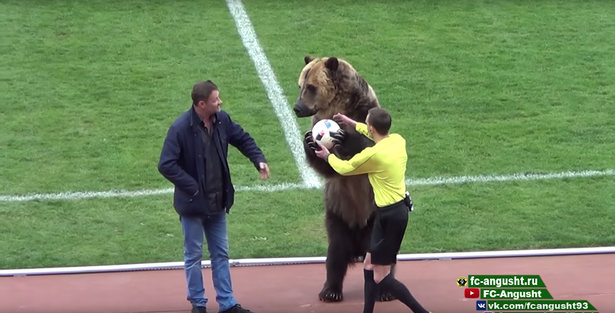 Elisa Allen, director of animal welfare charity PETA, said to the Mirror, that this performance was similar to abuse.

In addition to being inhumane and utterly out of touch, using a bear as a captive servant to deliver a football is downright dangerous. […] Common decency should compel the league to pull this stunt.

A point of view shared by Brian da Cal, country director of Four Paws UK, who thought the performance was anything but "entertaining".

Being chained up, muzzled and forced to perform unnatural acts in front of large, rowdy crowds of people causes tremendous stress and can have an untold impact on these animals, both psychological and physical.

A story that is not unlike that of the last dancing bears in Nepal, whose fate turned out to be tragic.