In a scandal which is making its rounds on the internet, organizers of a nightclub, Le Scala, in the north of France exhibited a bear and other animals in the entrance of the club.

Photos of the evening quickly spread across social media, causing indignation. "Scandalous! There are 1000 other ways to amuse yourself without exploiting animals", commented one user on the club's Facebook page. "How shameful to exploit animals like this! Pleasant for you but a terrible suffering for them", added another.

Caption: From where did they bring a bear to Scala? To attract people by exploiting the poor bests? What a sh*tty club, shameful.

While the bear, muzzled and paraded around on a leash at the entrance of the club, shocked people the most, others noticed a parrot and snake, too.

"We're still in the Middle Ages"

It's absolutely shocking to see that in France, we're still in the Middle Ages when it comes to the way in which we treat animals (…) The problem is that this isn't illegal. For this reason we are working with the services of the Minister of environment to no longer authorise this type of event.

"The next parties will not include animals"

The nightclub's organizers justified themselves in the face of a wave of critique by explaining that "the service was handled by circus professionals with 25 years of experience, who have all the necessary authorization". In a video published on Facebook, Alain Fournier, the director, explained that the animals "were never in the middle of the area where there was loud music and crowds". 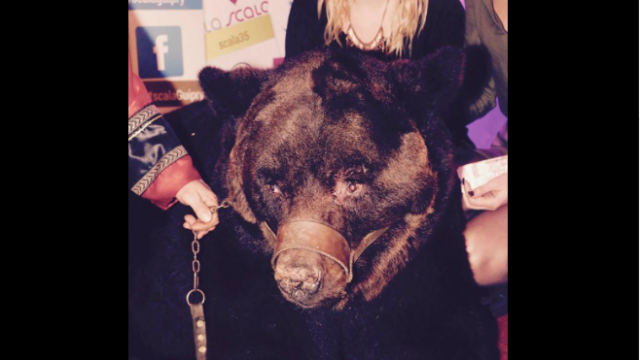 But most importantly, the manager of the establishment announced that animals will no longer be present in the program. "In front of a several critics, the next parties with a circus theme will be without animals", he explained.

10 000 signatures against animals in nightclubs

A petition has been launched on Change.org to stop the use of animals in nightclubs, and it has already gathered more than 11000 signatures. Click here to add your voice.