In mid-May, animal rescue charity, Hope For Paws, received a text from South Carolina with an urgent message; a kitten had managed to become stuck for 4 days at the bottom of a deep well, just 4 inches in diameter and needed rescuing as soon as possible.

They immediately asked their friend Kimberly Cockrell to inspect and evaluate the urgency of the situation for them. Upon arriving at the scene, she sent them a video in which the kitten can be heard meowing frantically. Despite attempts to rescue him, they had thus far been unsuccessful.

Loreta Frankonyte and a partner from Hope For Paws flew all night to the other side of the country to try and rescue the desperate kitten. When they arrived, they met with Rob and James from Freedom Plumbing and together they set to work on rescuing him.

Debra, the home owner, had connected many branches in the hope that they kitten would be able to climb up. Prior to their arrival, she tried to pull these branches out but in doing so, only succeeded in breaking them. She also sent down food to him. 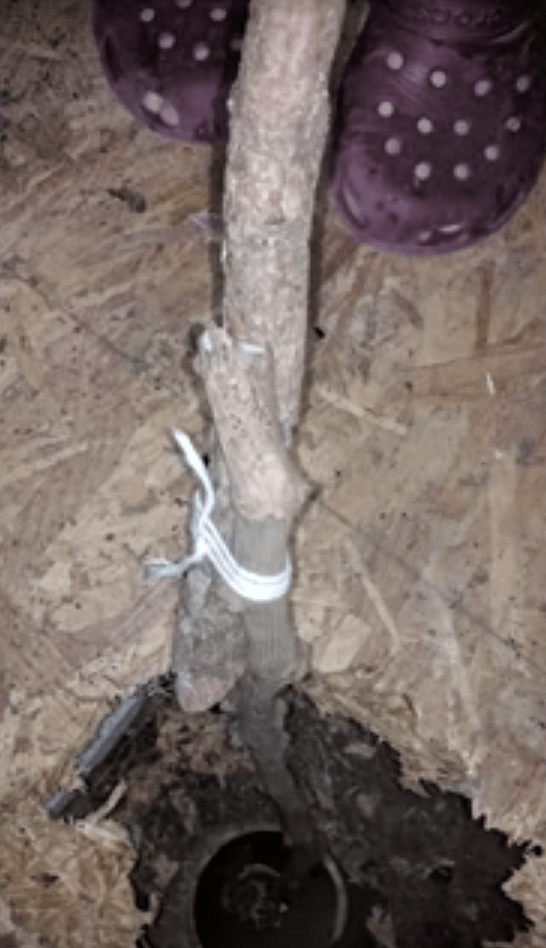 Screenshot of the rescue video by Hope for Paws showing the connected branches. Source: Hope For Paws Youtube

With his meows becoming weaker by the second, they needed to act fast. After a lengthy process of removing the wood, they decided to lower down a camera to get a clearer picture of the kitten's condition. 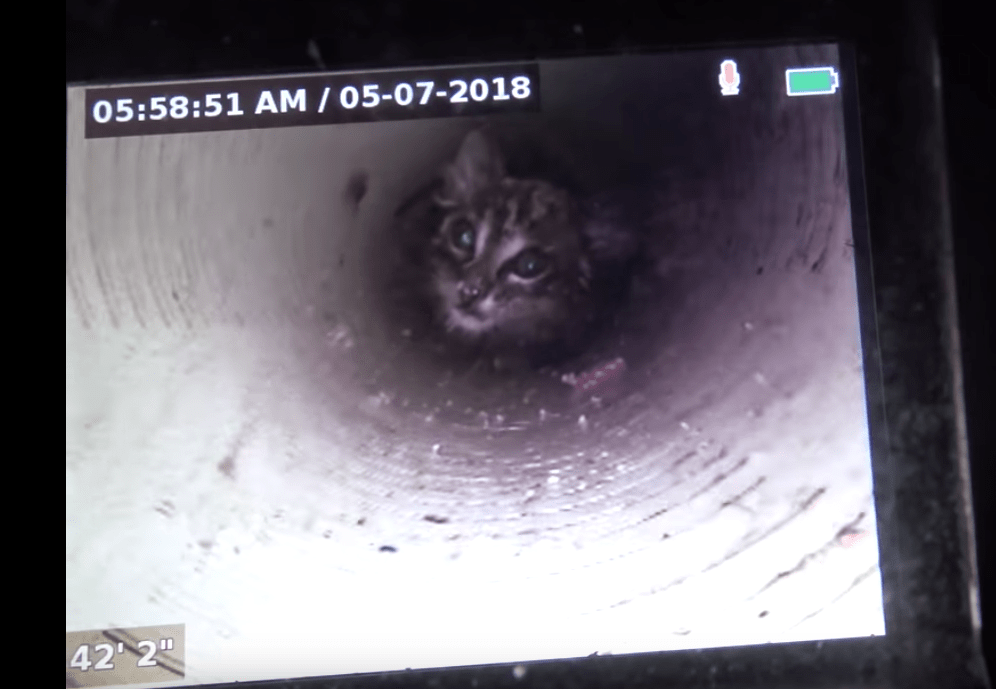 Screenshot of the video showing the kitten at the bottom of the well. Source: Hope For Paws Youtube

20, 30, 40 feet later, the camera finally comes across the kitten who can still be heard meowing. It becomes immediately clear that the kitten is exhausted, having spent almost 5 days in the narrow pipe. He closes his eyes and stops meowing.

Although the kitten was still alive, the team recognised the urgency of the situation and got set to work creating a "gently snare" to loop around the kitten and bring him to the surface.

Along with the camera, they lower down the snare. When the camera reaches the kitten, he can be seen trying desperately to climb up the pipe, exhausting himself in the process. Lumps of food can be seen on his face, obscuring his vision. 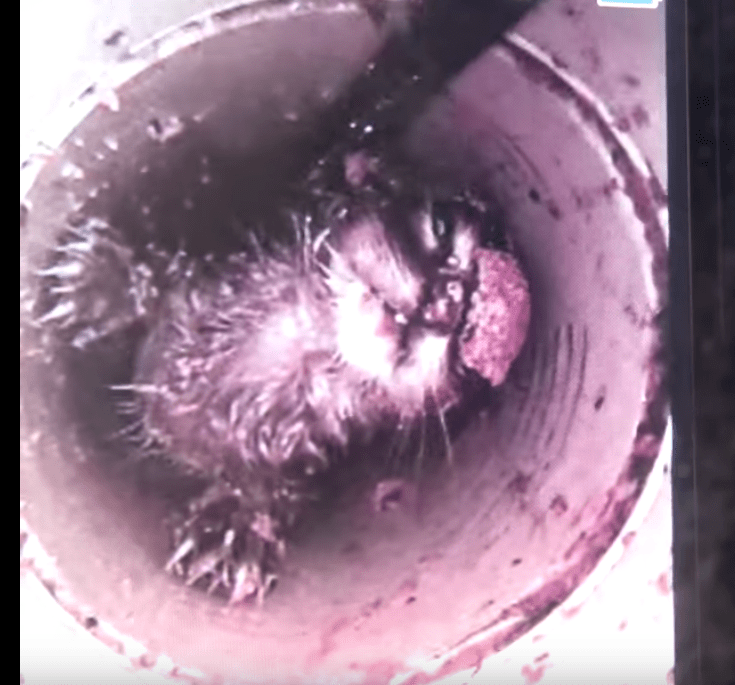 Screenshot of the video showing the kitten with food on his face. Source: Hope For Paws Youtube

The meowing quickly becomes more urgent and the team come upon the realisation that a re-adjustment was needed in order to maximise the snare's effectiveness. All of  sudden, the kitten stops meowing.

Adjustments made, the team once again lowers the camera and the snare. This time with greater success! They managed to loop it around the kittens head and started to gently pull him up. Once the kitten's head finally surfaced, it was all hands on deck to make sure he didn't try to run away. They wrapped him up in a blanket and nestled him against their chest. 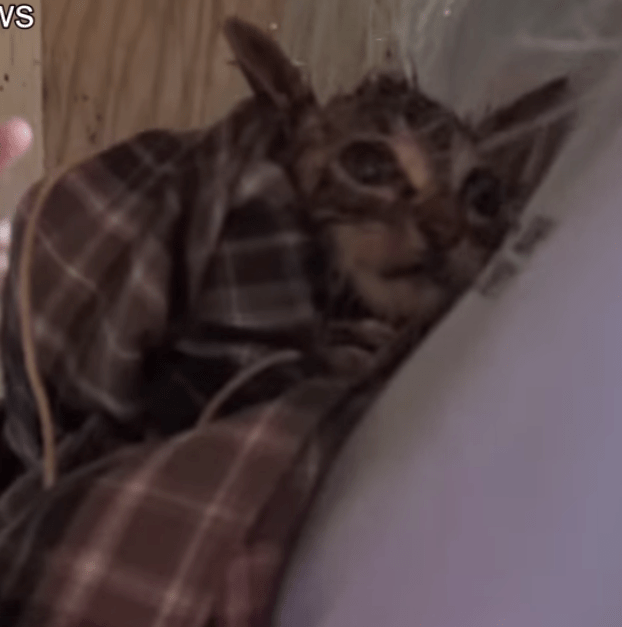 Screenshot of the video showing the kitten against one of her rescuers' chests. Source: Hope For Paws Youtube

He is then immediately taken to the hospital for IV fluids where the toll of his 120 hour ordeal start to become clearer. As well as suffering from hypothermia, the little kitten, later named Jessie, was also suffering from muscular atrophy, struggling to walk. Thankfully, Jessie tested negative for both FIV and FeLV.

After a nice wash and shampoo in a sink, Jessie looked significantly better and was fully on the road to recovery. The next day Debra came to visit him whereupon she exclaimed that she thinks he "may have used up a few of his nine lives". 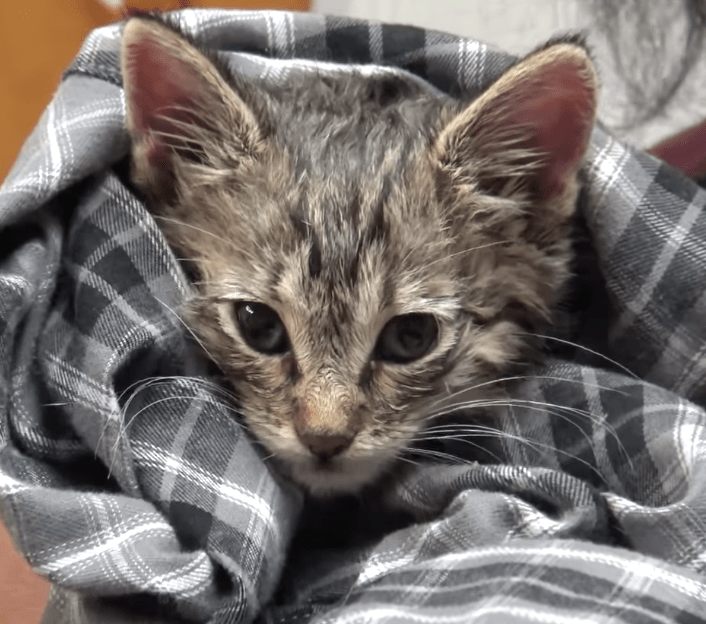 Screenshot of the video showing Jessie cuddled up after visiting the veterinarian. Source: Hope For Paws Youtube

Nevertheless, just 26 hours after his rescue, he was excited to play, relishing in the joys of being a kitten. He now has a wonderful home with a woman named Patty, who has also has a rescue dog named Shaggy. He is now living the life he deserves, receiving no shortage of love and attention.

Hope For Paws used the rescue to remind people to check their property for any potential hazards for animals.

If you would like to donate to Hope For Paws and help more animals like Jessie, you can do so by clicking here.