The story takes place in a zoo in the east of Russia, the Safari Park de Shkotovsky. Amur, a magnificent resident tiger, is often given living prey to eat for his meals. Mostly, he likes feasting on goats and rabbits.

But last week, Amur shocked the whole world when he spared the life of a young female goat who was served to him for lunch. Not only did he decide not to kill the little goat but he even showed her some affection!

One of the zookeepers told the Siberian Times :

Our tigers get live prey twice every week. Tiger Amur knows very well how to hunt goats and rabbits. But recently he came across a goat that he refused to hunt.

According to him, it was the goat's cool composure that made him spare her life. He explained:

We think that the goat never came across tigers and no-one taught her to be scared of them.

The new friends now follow each other around everywhere. The goat is so at ease around the tiger that she has even nicked his bed… The tiger ended up having to sleep on the roof of his shelter thanks to his plucky friend! 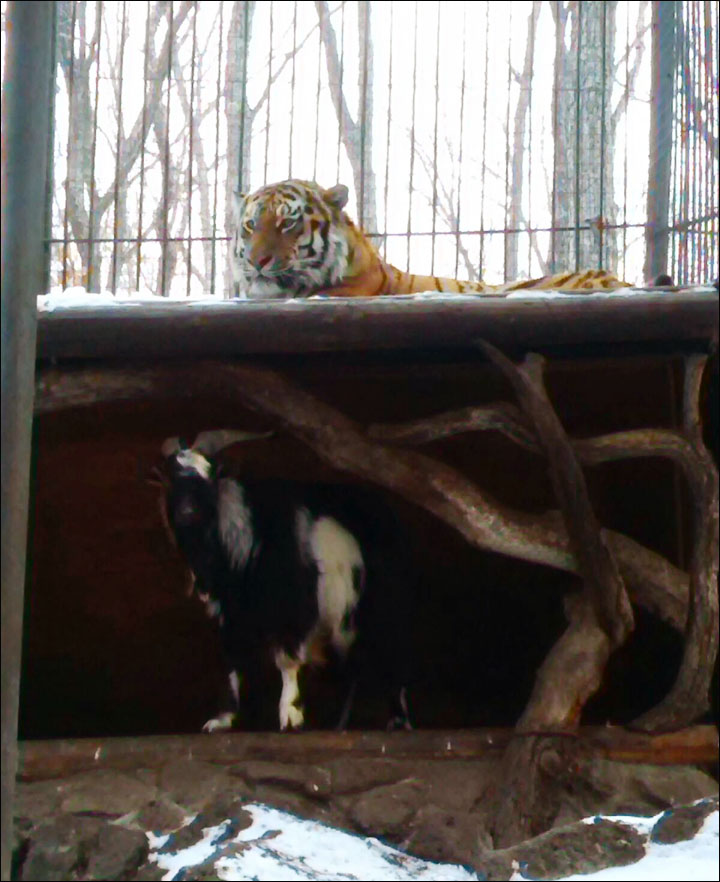 Whilst this story is very touching, we must not forget the absurdity of zoos where animals are deprived of their natural environment in order to entertain humans. And we should also let this story be a reminder of the cruelty of such a practise as they serve up living and breathing animals to these big cats right in front of the public's eyes. Whilst most zoos have banned this practise of viewing feeding time, it still goes on in countries like Russia and China.

To end on a lighter note, you can watch the video of this incredible friendship here: