Last November, we told you about one of the most astonishing animal friendships that arose in the Shkotovsky zoo, in Russia. A living goat which had been served up to a tiger for his supper ended up becoming best friends with his predator.

Although many experts claimed that their friendship wouldn't last longer than a few days, it seems that a month on, and they're only getting closer.

Amur (the tiger) and Timur (the goat) have been getting along like a house on fire for the last five weeks. Whether it's playing together, particularly hide-and-seek, having cuddles, or even a bit of rough friendly fighting, they are truly inseparable.

One of the zoo keepers explained to the Siberian Times why he thought the goat managed to stay alive when confronted with the giant feline:

We think that the goat never came across tigers and no-one taught her to be scared of them.

Naturally, their friendship has shocked the entire world, with thousands of people flocking to see them in action. The zoo has now had an increase in visitors by 300%. What's more, Amur and Tigur are going to be the stars of not one, but two, documentaries about their friendship! 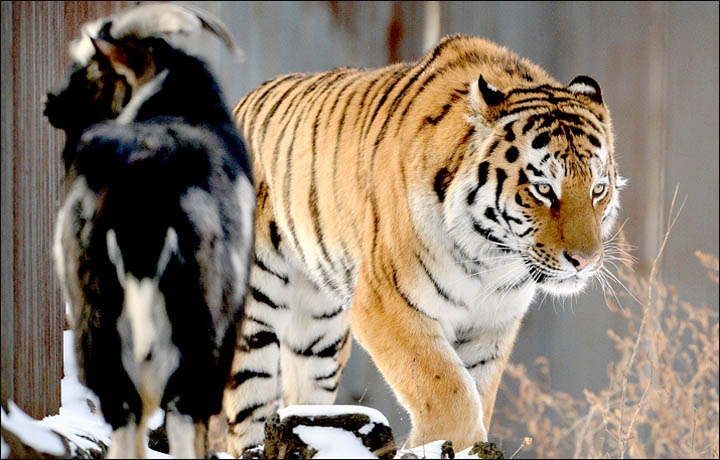 Whilst this story is very touching, we must not forget the cruelty of such a practise as they serve up living and breathing animals to these big cats right in front of the public’s eyes. Whilst most zoos have banned this practise of viewing feeding time, it still goes on in countries like Russia and China.

Dmitry Mezentsev, one of the zoo managers, told the BBC :

We still give Amur living prey to feed on twice a week, but we no longer offer him goats, out of respect for Timur.

Who knows how this story will end. Perhaps Timur will be the first ever goat to be lifelong friends with a tiger… We sure hope that is the case! Whatever happens, we'll be keeping you updated.