This must be one of the most touching and unlikely families on the internet.

Take two Pit Bulls, two ducks, two Terriers and a cat with a difficult past; offer them a new life of happiness and serenity; instil confidence in them and let it grow: there you have Kasey and Blake's perfect recipe for a family. This incredible couple from Missouri have been rescuing animals in need for 10 years now.

It all began in 2005, when the 19-year-old Kasey Boggs adopted Roxy. This young, sick Terrier was wasting away in the window of a pet store, reports BarkPost.

Roxy was Kasey's first rescue. The young woman offered the little dog a new start in life, along with all the love and care necessary to help her recover. 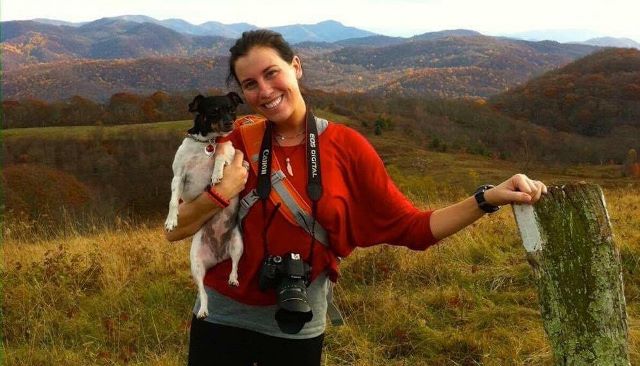 Blake was her boyfriend at the time and would later become her husband, and he is also a great animal lover.

Together, they grew their family and welcomed in two Pit Bulls, Jake and Rosie. These dogs also had a difficult start to life.

Jake was trapped in a cage by his owner for the first few months of his life. And yet the traumatised Pit Bull quickly got back his lust for life thanks to his rescuers. 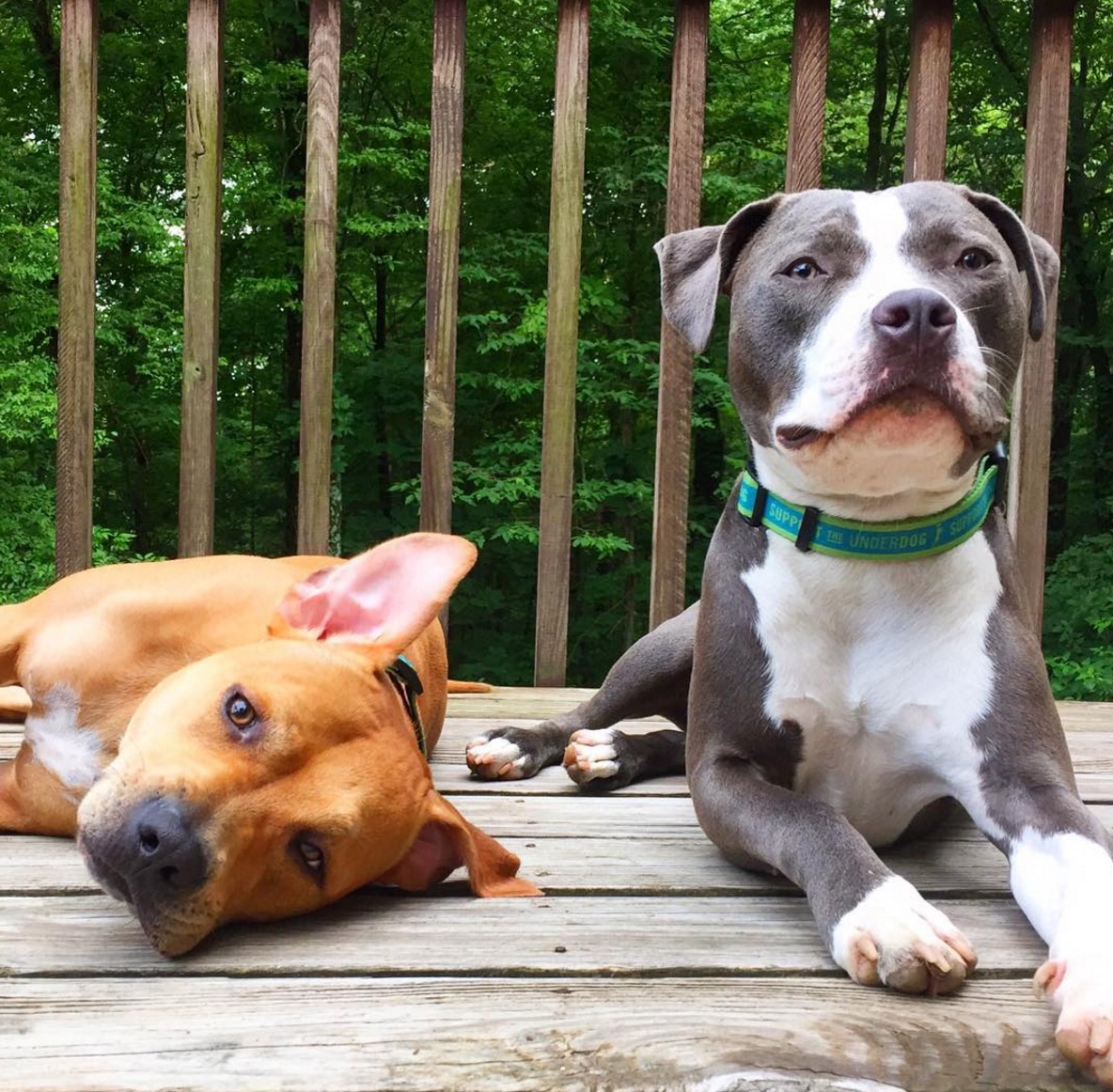 As for Rosie, she grew up in a deprived area of the US where Pit Bulls are often used as fighting dogs. She was then adopted by a rather careless owner who only wanted her for her own safety purposes, without really having the means to look after her.

When Blake and Kasey brought her into their home, she had a seriously injured paw which had never been taken care of. She was also given a new lease on life thanks to such a welcoming family.

Presenting the fourth canine accomplice: Edith, the Terrier cross who narrowly escaped the worst. The real miracle dog was discovered by the Humane Society in a dingy alley in winter, sleeping on the dead body of her mother and the rest of her litter.

Edith was suffering from mange and intestinal parasites. Once more, she was able to get back on her feet with the love and care of her saviours.

But where would the team be without a feline friend? That's where Mia steps in, a little ginger cat with half a tail missing and an unknown past.

Upon arrival at the shelter, she quickly learnt to respect the group of dogs and today is happy going on walks with them, with a harness of course. 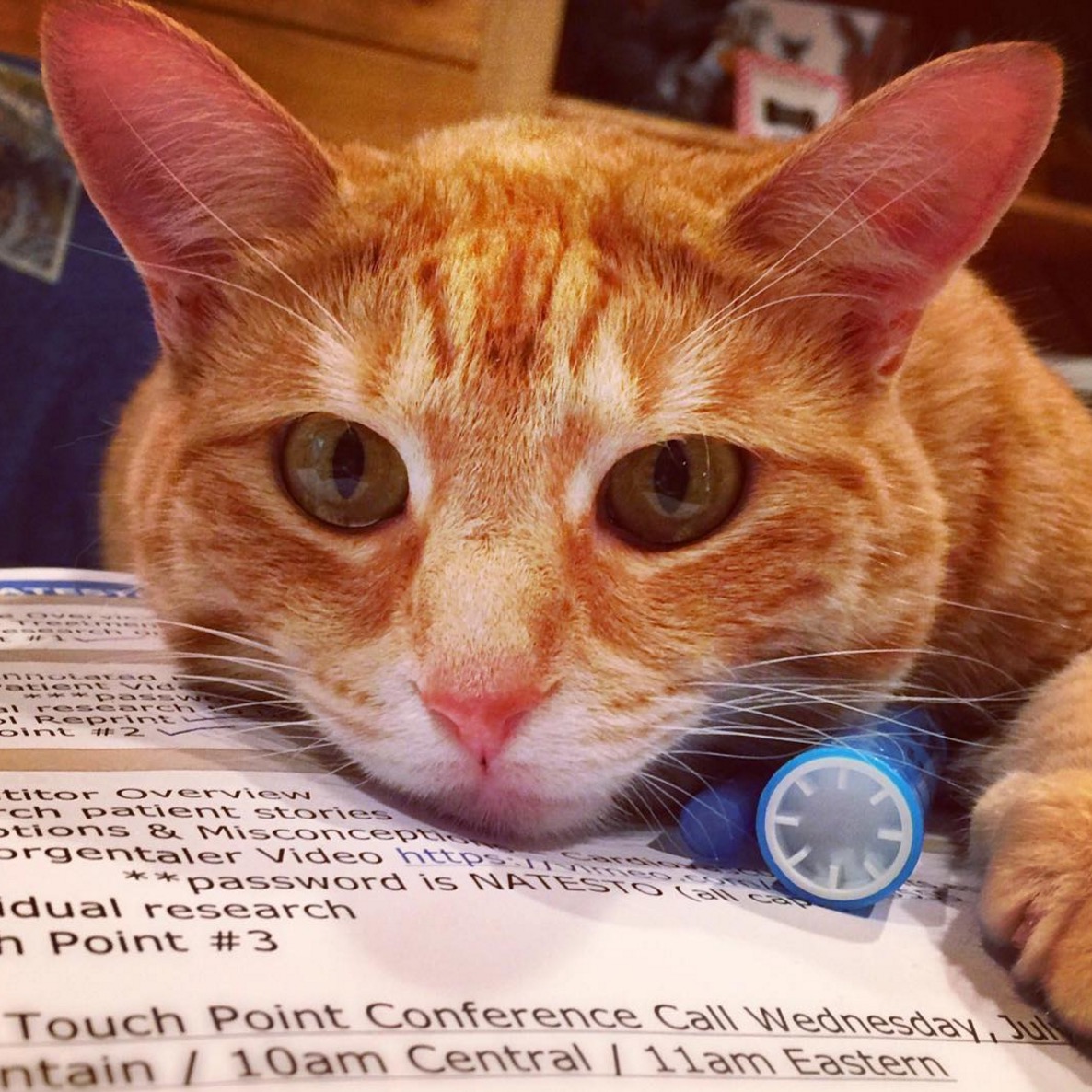 And just to add a bit of magic to their ensemble, Kasey and Blake have just recently welcomed in two ducklings, Gertrude and Donald.

They were taken away from their mother too early in life, but what does it matter? They were quickly adopted by Jake, the sweetest Pit Bull of the lot. 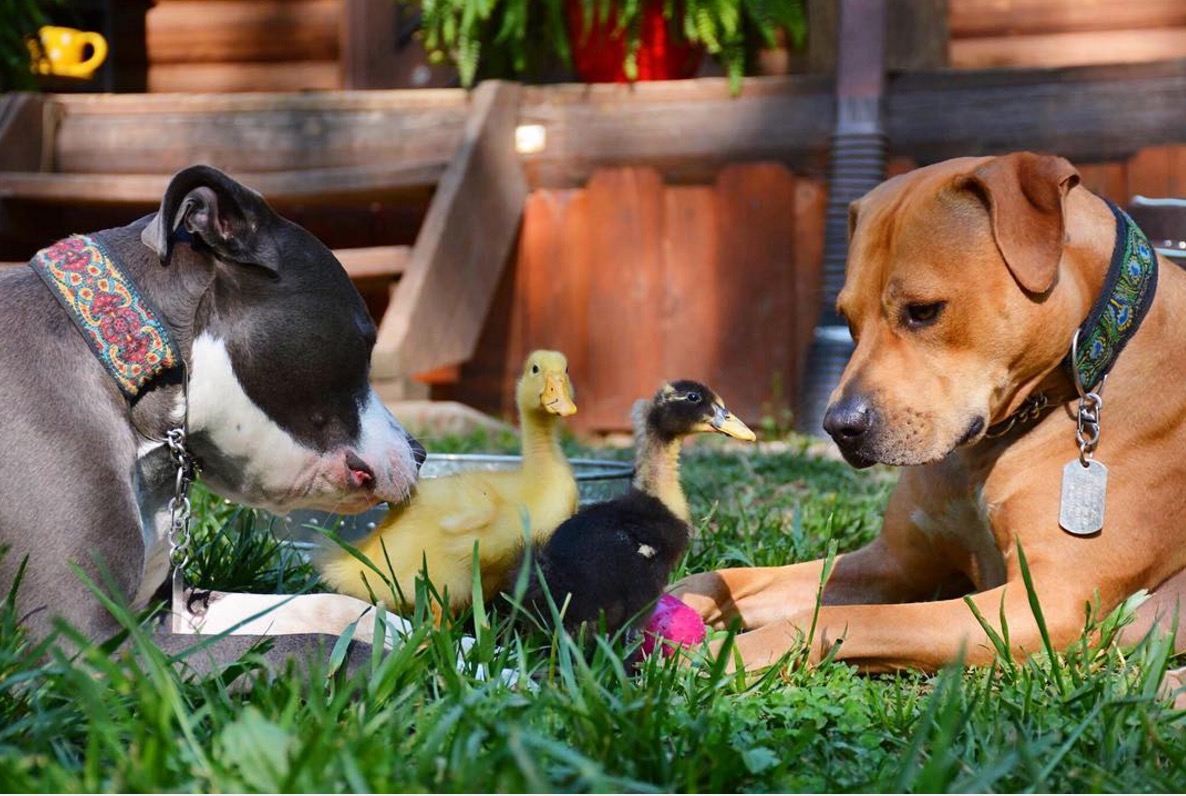 The little family are making the most of life, between strolls and photo shoots, to the delight of the 40,000 people following their adventures on Instagram.

Though the couple obviously intend to continue their work offering a new start to other animals, the birth of their first child next year threatens to keep them busy… 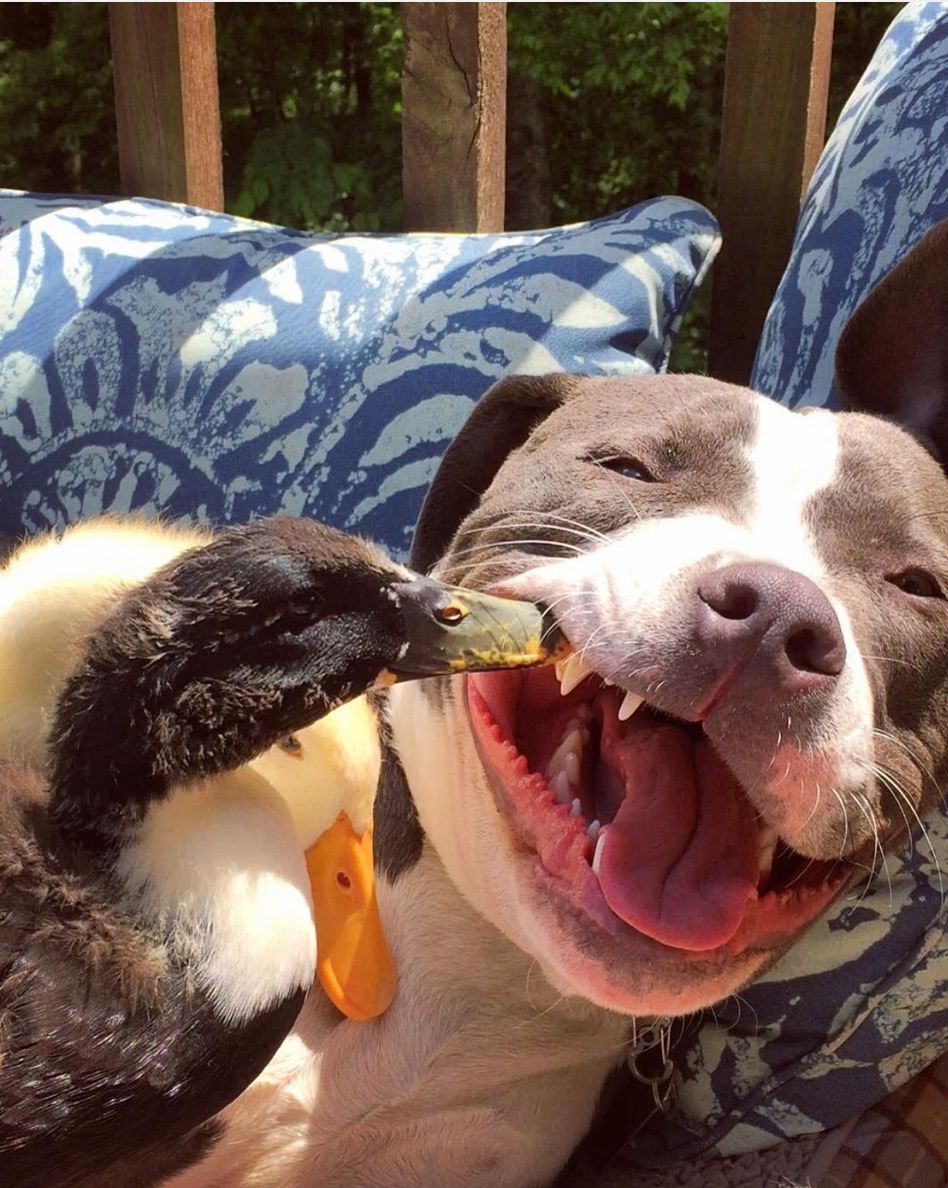 The little human will at least be certain to grow up in good company, where she will learn to love and respect animals from an early age! 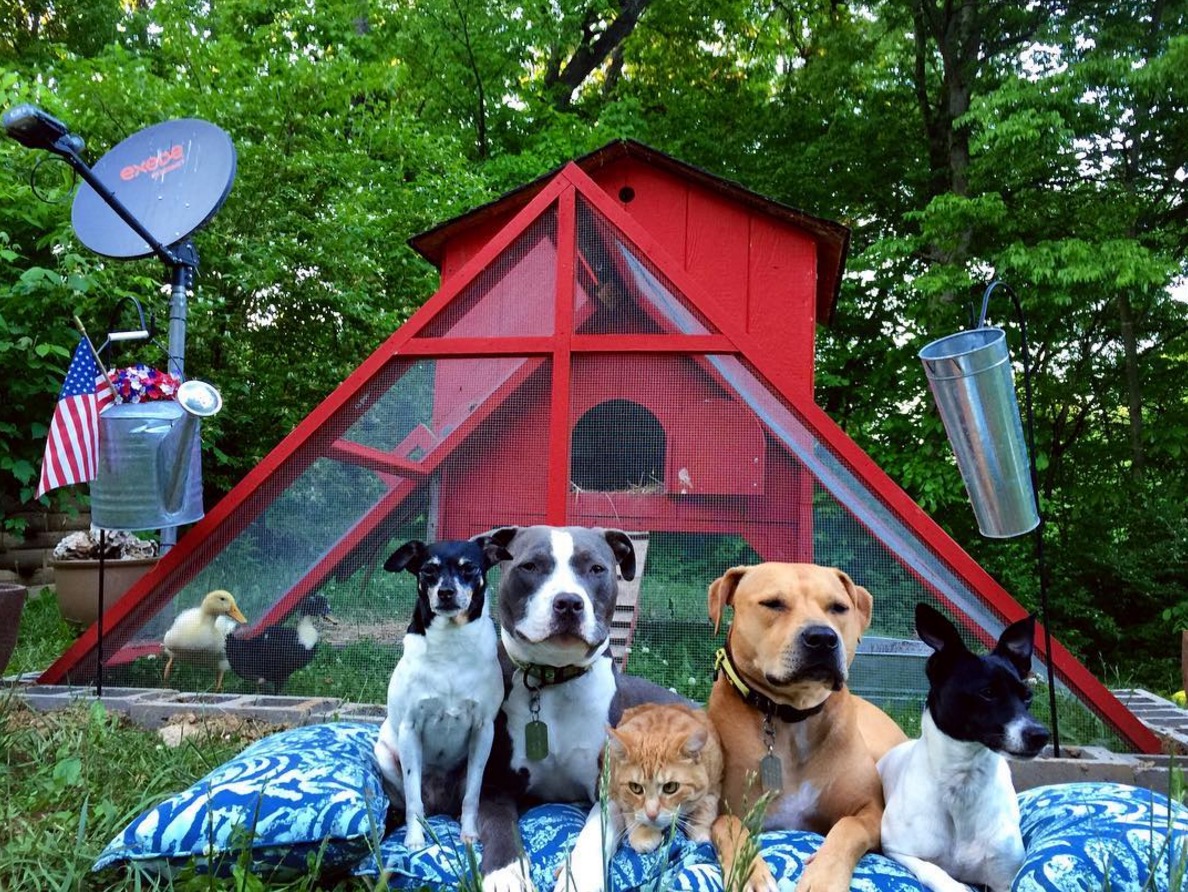