We all know our canine pals love a good walk around the block, but sometimes they can get aggressive around other dogs. When this hostility turns from angry barking to an actual fight between them, it can be scary and nerve-wracking for everyone involved. Read the following steps to be able to calmly and effectively separate the animals from each other when normal leash pulls just won't work.

Eric Tramson is a French dog trainer and police officer who creates Youtube videos to educate people on the best ways to instruct and handle your dog.

One of his most popular videos is called "How to separate two fighting dogs" with over 26,000 views.

He begins by showing a video which was taken in the United States of two dogs attacking each other, while the owners helplessly try to pull them apart, but to no avail.

He demonstrates his tactics with German shepherds who have been specially trained for these exercises. Tramson explains that once a dog this size has bit down on something, his jaw is like a crocodile, and it is next to impossible to get him to let go by sheer force alone.

Again, the best method is to pull the dogs apart if possible, but with an extremely aggressive dog it might now be an option. The experienced trainer gives three simple tips to successfully regulating this problem and getting your dog to safety.

The first method involves throwing a bucket of water over the fighting canines. While this may be an uncomfortable experience for your pup, it works as a surprise tactic get him to release his grip and won't actually do him any harm. According to Tramson, it is the easiest and least risky of the three techniques, but if a dog is trained to bite, like a police dog for example, it most likely will not work. 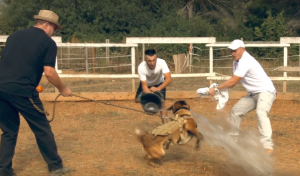 Each owner must place himself behind his respective dog,  then take and lift their hind legs into the air. Continue to do this until the front legs are also off the ground, and the pooch will lose his grip in his disorientation. As soon as he lets go, take the leash, and get as far away from the other dog as possible. 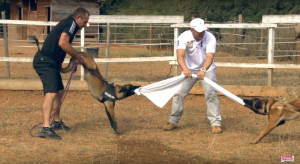 This method is only for experienced and trained personnel and should be a last resort, as it can be extremely dangerous for those who do not perform it properly. Placing your hands around the neck, tighten your grip and it will ensure that the animals will release their hold. For any dog lover the idea of grabbing our pups by the throat even for a second is horrifying, and for good reason. This technique is extremely risky and can cause fainting or death. Most situations will not require this use of force as any of the above tips should be more than sufficient. This method is used by professionals in extreme cases where immediate action is needed to avoid harm for both dogs and humans and nothing else has worked. 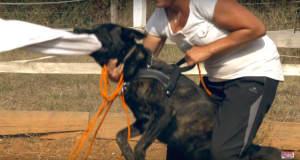 Remember these tips for next time your dog has a fight to make sure the situation deescalates in the safest manner possible for all involved.